I often get contacted for more info about the core and recommended readings for this course, which I realize now were not grouped as clearly as they could be. These can now be found by looking at the Syllabus and Further Recommended Reading pages. Enjoy! 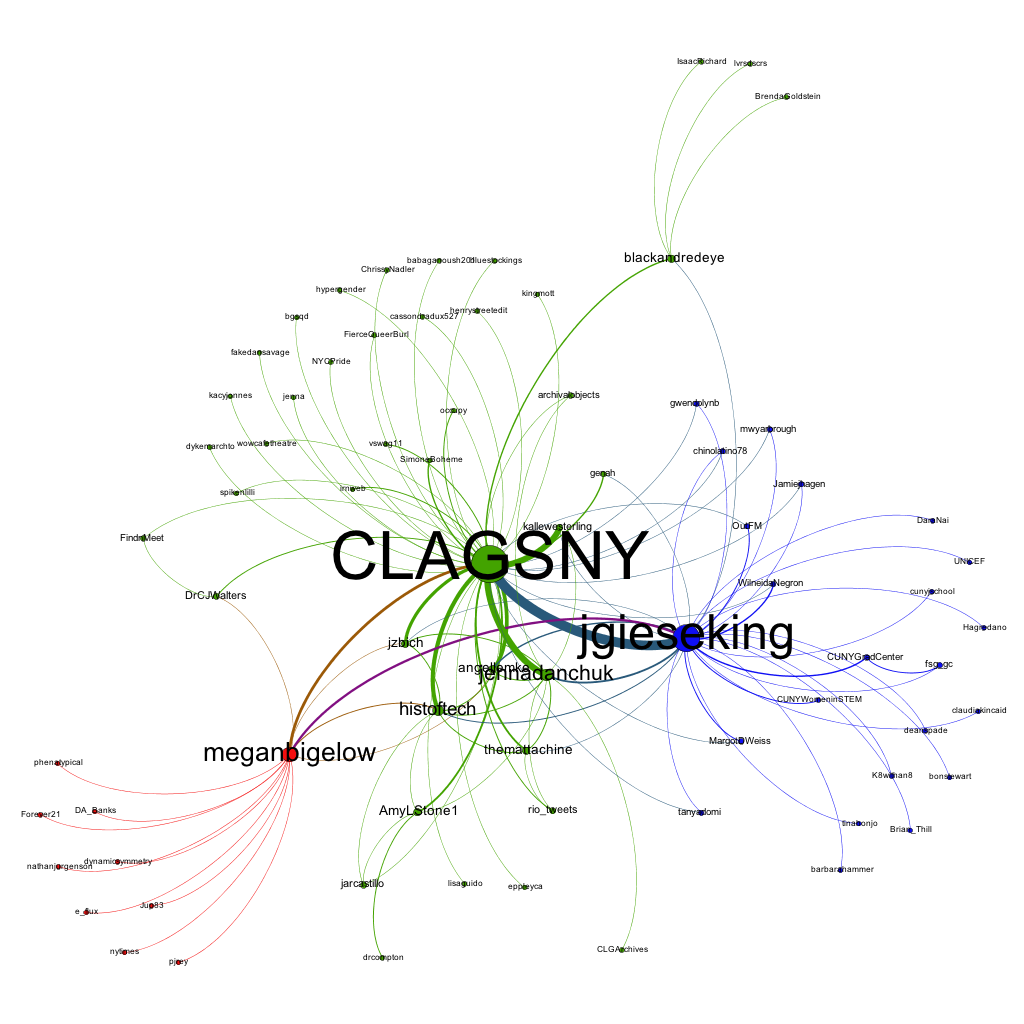 Today we are launching the Our Queer Lives and Spaces (OQLS) Project!

OQLS is a living archive that affords lgbtqtstsiq people a space to map and share their stories online through mobile devices, multimedia, & web and geospatial technologies. In other words, anyone can text, call, or type in her/his/zee’s own stories from anywhere in the world and it will geocode to one giant, queer map. Hashtag: #OQLS.

Anyone and everyone is invited to join!

Some more background on OQLS: This project is a long-term dream project of mine (Jack). The technology did not exist until just recently and given our field trip today, I could not imagine launching OQLS with a cooler group of people! You do not need to attend our field trip to dive in. Just follow the directions above.

We are finally off to the West Village to yammer, wander, share stories, and launch OQLS. TODAY! We are meeting at the entrance to Christopher Street Piers at 11am. If you are running late and still want to hang out with us afterwards, my cell # is in the last email to the class.

We will be meeting at 6.30pm US EST in the West Village at the entrance to the Christopher Street Piers, just where the pier begins. We will visit some key spots and launch the OQLS Project as we go! At 8pm, we will meet at the one and only Stonewall Inn for drinks if you cannot make the walk.

Feel free to make you vojo.co account before we meet! I’ll send an email out to everyone enrolled in CLAGSqNY with directions before we meet.

I will not be able to live stream this field trip but I will record it on the OQLS map as we go!

It may not seem like much but this course evaluation will be pretty key for not only the future seminars in the city but also for me as I search for an academic job and prove to the world we need more classes exactly like this. If you got anything at all out of this course–or even not!–please take our course evaluation here. It takes just a few minutes.

Our Queer Lives and Spaces (#OQLS) Project is a living queer archive that affords lgbtqtstsi a space to map & share their stories in their own words and images. Read more about & join the project here: http://jgieseking.org/CLAGSqNY/oqls/. 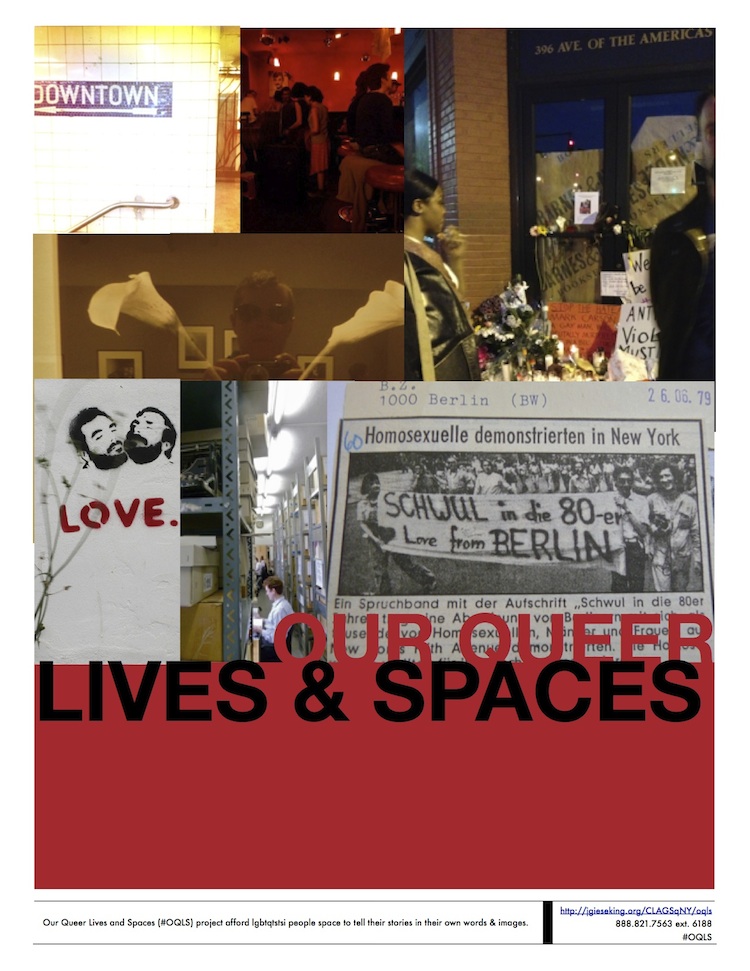 What are your questions for our fourth class? Share them here or via Twitter with the hashtag #CLAGSqNY. For more on tonight’s class, read Fourth Class: Neighborhoods and Communities and Gayborhoods, Oh My.

…it’s funny—I almost never go to Park Slope [in Brooklyn]. I feel like it’s not a lesbian neighborhood. …my girlfriend’s aunt lived there in the ‘70s and when we moved there in 1989 she was like, “Oh! It’s not a lesbian neighborhood anymore! All of the Columbus Avenue [implying wealthy, predominantly White elite] people have moved in.” …all of the—I don’t know like institutions, like, The Rising [Café and Bar], they’ve disappeared. [Pause.] But, I guess it doesn’t really matter I suppose because if people feel like something’s a lesbian neighborhood then by dint of their believing it, it is. – Sarah ‘85 (from Gieseking 2013)

A neighborhood is understood as being “dominated by residential uses,” “walkable” in scale, and a concept of a (physical) territory that is often conflated with (social) communities that live within those territories (Gregory et al. 2009; see also Colombo, Mosso, and De Piccoli 2001). While lgbtq people have always existed in urban areas, lgbtq spaces were most clearly articulated in neighborhoods (Chauncey 1995; Weston 1995). Lgbtq people in the 1970s formed spatial concentrations in urban residential areas which, over time, became more visible and fixed as “gay ghettos” (Levine 1979). Those who lived in or used these spaces often experienced a reprieve from isolation induced by homophobia and grew communities from which to work toward social and political gains (Knopp 1997; Enke 2007).

Ghettos, however, hold negative connotations of being forced into a space with a lack of resources. By 1983, Manuel Castells argued that gay men in San Francisco’s Castro district were living not in a ghetto but in a neighborhood based on the confluence of their unique production of culture, economy, and physical spaces. Furthermore, the difference between marginalized ghetto space and gay space was one of agency:

While…others used the term ‘ghetto,’ gay militants speak of ‘liberated zones’: and there is indeed a major difference between ghettos and gay areas since the latter are usually deliberately constructed by gay people to create their own city, in the framework of the broader urban society. (Castells 1983, 272)

The majority of research on lgbtq spaces continues to expand upon Castells’ understanding of cultural and economic territorialization in the form of physical, geographical neighborhoods. Through its popularity and idealization as a “safe space,” the lgbtq neighborhood continues to be read by many as a space of liberation, community, and possibility. At the same time the neighborhood failed in many ways for many kinds of people, namely in regards to respecting and creating room for difference. The (supposed) lgbtq neighborhood, or “gayborhood” as it has affectionately been called, is still the most often referenced lgbtq space in both academic and popular literature, even as others question its demise.

Beyond physical neighborhoods and gayborhoods, there is also the related and hotly debated issue of community. The term community was first used by the burgeoning gay and lesbian movement of the 1960s and 1970s (D’Emilio 1983a; Weston 1995). Benedict Anderson’s (1983; 1983) concept of “imagined community” if often used in studies of lgbtq spaces to explain the fleeting, fragmented nature of their spaces but the congealed social and cultural life shared across them. Anderson defines an imagined community as follows:

It is imagined because the members of even the smallest nation will never know most of their fellow-members, meet them, or even hear of them, yet in the minds of each lives the image of their communion. Communities are distinguished not by their falsity/genuineness, but by the style in which they are imagined. (1983, 6–7)

My reference to “The Wizard of Oz”‘s “lions and tigers and bears, oh my” in the title of this week’s class harkens back to what we hope and fear we will find in the forest of our search for lgbtq life and culture: neighborhoods, communities, and gayborhoods.

Why are these spaces so important, and also so contentious? Why do we return to them again and again but so many of us find no home in them? Are they real or imagined, historic or present in our everyday queer lives? What future is possible for the gayborhood, if any? And do we desire a gayborhood to continue?