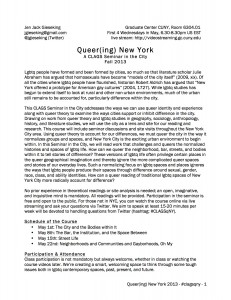 Sustaining a Conversation / Taking Part in the Course

Course Description
Lgbtq people have formed and been formed by cities, so much so that literature scholar Julie Abraham (2009) has argued that homosexuals have become “models of the city itself.” Of all the cities where lgbtq people have flourished, historian Robert Aldrich (2004) has argued that “New York offered a prototype for American gay cultures.” While lgbtq studies has begun to extend itself to look at rural and other non-urban environments, much of the urban still remains to be accounted for, particularly difference within the city.

This CLAGS Seminar in the City addresses the ways we can use queer identity and experience along with queer theory to examine the ways cities support or inhibit difference in the city. Using queer theory to account for our differences, we must queer the city in the way it normalizes groups and spaces, and New York City is the exciting urban environment to begin within. In this Seminar in the City, we will read work that challenges and queers the normalized histories and spaces of lgbtq life. How can we queer the neighborhood, bar, streets, and bodies within it to tell stories of difference? These versions of lgbtq life often privilege certain places in the queer geographical imagination and thereby ignore the more complicated queer spaces and stories of our everyday lives. Such a normalizing focus on lgbtq spaces and places ignores the ways that lgbtq people produce their spaces through difference around sexual, gender, race, class, and ability identities. How can a queer reading of traditional lgbtq spaces of New York City more radically account for difference?

Drawing on work from queer theory and lgbtq studies in geography, sociology, anthropology, history, and literature studies, we will use the city as a lens and site for our reading and research. This course will include seminar discussions and site visits throughout the New York City area.

No prior experience in theoretical readings or site analysis is needed; an open, imaginative, and inquisitive mind is mandatory. All readings will be provided. Participation in the seminar is free and open to the public. For those not in NYC, you can watch the course online via live streaming and ask your questions via Twitter. We aim to speak at least 15-20 minutes per week will be devoted to handling questions from Twitter or the course blog (hashtag: #CLAGSqNY).

About the Core Readings & Further Recommended Readings
To access the readings, register for the course and the link to the readings will be sent to you. Do your best to read as much as possible but make sure to do at least one or two full readings per week. Further recommended readings will continually be added to the website as a drop-down tabs under Syllabus.

I have created an open access Zotero library for the course so that we can share citations we like in a public list. There is no need to participate but feel free to use the lists as you wish. Learn more about Zotero here. Feel free to reach out to me (Jack) for works on specific subjects of interest, or check out my Gender, Sexuality, and Space Bibliography on my website.

Weekly Readings
Week 1 / May 1st: The City and the Bodies within It

Week 2 / May 8th: Place-Making, i.e. the Bar, the Institution, and the Space Between

Week 4 / May 22nd: Neighborhoods, Communities, and Gayborhoods, Oh My

Participation & Attendance
Class participation is not mandatory but always welcome, whether in class or watching the course videos later. We’re creating a smart, welcoming space to think through some tough issues both in lgbtq contemporary spaces, past, present, and future.

Sustaining a Conversation / Taking Part in the Course
To keep the conversation going beyond the classroom, you have the opportunity to share your responses to the readings to bring your experiences to class. We will be using two venues for ease of use: 1) the Seminar Blog and 2) the #CLAGSqNY hashtag on Twitter.

What’s Involved in Making a Comment?
A comment is at most one or two paragraph(s) that responds to one or more of the week’s readings through your own experiences. Under a post, there is hyperlink to “Leave a Reply.” Be sure to use the same name/pseudonym to connect conversations over the weeks. There’s no requirement to chime in but come by, read, and comment as you will.

You can include and/or make visuals, videos, audio, and other mixed media by just pasting in the links; be sure to include proper citations. You could also include or instead post some questions developed in the course of your reading that you would like to share with the group. There will be two threads per weekly class, one before the class and one during the class.

What’s Involved in Using a Hashtag?
Much of the participation in the seminar will happen through hashtag via Twitter. Our course hashtag, #CLAGSqNY, affords us a public way to connect with each other and discuss the seminar beyond the physical classroom with a broader audience.

Grading & Credit
There are no grades for this course. Rather, it’s a queer brain jam. However, if you want to seek credit from a home institution, we can discuss the work necessary for a certificate of completion.


Warning: count(): Parameter must be an array or an object that implements Countable in /home/jgiesek1/public_html/CLAGSqNY/wp-includes/class-wp-comment-query.php on line 405