Google is doing data analysis for you in your web search, just in an effort to out people or purportedly have gaydar.  Recent articles in The Advocate and Gawker indicate that typing in “is jodie foster gay” will give you a reply Foster’s sexual orientation is, indeed, “Lesbian” (the bold I borrowed from the google search, see image).  The same can be said for a variety of celebrities but there is no rhyme or reason to who is included or why. 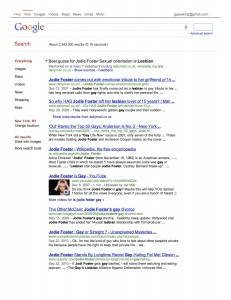 I find this to be odd and inappropriate for two reasons.  First, who has the need to make a “best guess” of Katy Perry’s or Enrique Iglesias’ sexuality, or anyone’s sexuality for that matter (unless perhaps you’re aiming to ask them out and find that key)?  While I encourage everyone to be out, we live in a world where this is not yet safe for people because of different parts of our identities like age, race, class, citizenship, geography, and/or gender identity.

Second, I’ve spent a better part of the day trying to find trying to determine if Google is going to go the askjeeves route and give us answers to questions when we structure our web searches like a question.  The only information about google offering any sorts of such answers was a short lived project in 2006 called GoogleAnswers which had people pay to produce knowledge together.  (I believe that is called the internet.)  If Google’s first attempt at producing on the spot analysis to answer your queries without a cost is to tell you who’s a “Lesbian” or who’s “Straight,” this is a sad use of the minds and content available to Google.

In the publicness of the internet, there is still a form of privacy determined by culling through sites and other sources (a professor would pray the latter is always the case too for us all) to determine what those claims and data mean.  This “best guess”-ing eliminates the work of the mind as well as the privacy of the individual to individual sites, and this because someone was wondering if Katy Perry claiming she kissed a girl and she liked it meant she stuck around.

A Queer New York is out!

A Queer New York is available for 30% off with code QUEERNY30.